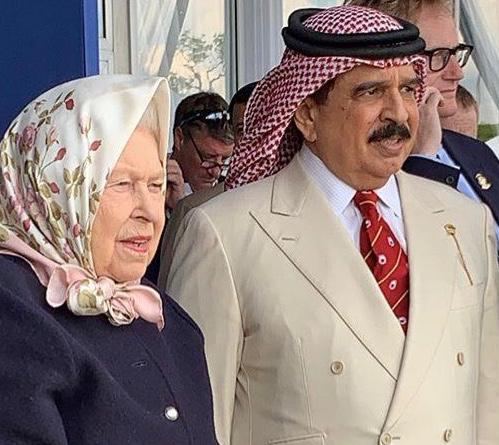 Share on facebook
Share on twitter
Share on linkedin
Share on whatsapp
Share on email
Press Release
For Immediate Release
The Bahrain Institute for Rights and Democracy (BIRD) urges the UK government and royal family to raise serious concerns regarding human rights abuses in Bahrain during the King’s visit this week. BIRD has urged members of the UK royal family and government to publicly raise human rights concerns with the King of Bahrain during his visit to London this week. Letters have been sent to Queen Elizabeth II, Prince Charles, Prince Andrew, Prime Minister David Cameron, FCO Minister William Hague and opposition leader Edward Miliband.
Since February 2011, the government of Bahrain has been leading a brutal crackdown against its civilians who are asking for basic human rights, civil liberties, equality and an end to corruption. Peaceful protests were responded to through the brutal and excessive use of force leading to over 120 deaths to date. The government of Bahrain set aside its obligations under international law and took part in systematic torture and ill-treatment, arbitrary arrests and imprisonment, the destruction of places of worship and the arbitrary revocation of citizenships amongst other severe violations. International organisations such as Amnesty International and Human Rights Watch have repeatedly condemned these violations and criticised the response of the UK government to the crackdown.
UK Royals

BIRD highlighted the close friendship held between members the UK and Bahrain royal families and has urged the queen to use this influence to help end rights abuses in Bahrain. Concerns have also been raised over the frequent visits of Bahraini royals to the UK arguing:

“It is also of deeper concern that individual members of the Bahrain ruling family are regularly invited to and visit the UK, and in most cases seek audience with Her Grace despite the horrific crackdown. Such a discourse has only lead to the rise of impunity in the country with little accountability for those who take part in serious human rights violations against civilians and protesters.”

Letters to Prince Charles and Prince Andrew have also highlighted their  interests in the country including he Prince’s Foundation for Building Community that signed a deal with the government of Bahrain in May 2013 to advise the Kingdom on home development. The UK Foreign Affairs Committee report on the UK relationship with Saudi Arabia and Bahrain released in November 2013 argued:

“The Government is right to pursue a strategy of engagement with Bahrain and to demonstrate the benefits of a reforming, moderate approach. However, British engagement and support should not be unconditional in the face of continued violations and slow implementation of reforms. There is a danger to the UK’s credibility if it allows itself to become associated with the problems in Bahrain rather than solutions.”

UK Government Officials
In letters sent to Prime Minister David Cameron, BIRD has expressed extreme disappointment in the fact that despite human rights abuses in Bahrain deteriorating, UK support for the government has increased.

Despite displaying limited concerns over individual cases of rights abuse, the UK has strengthened its relationship with the government by entering into defence contracts, approving arms sales and remaining silent at an international, namely United Nation’s, level.

“The [UK] Government should not grant any license that could contribute to internal repression and should make decisions on other export licenses on a case-by-case basis, ensuring the strict implementation of existing policies.”

It also claimed that such defines accords are predictably considered as a public signal of support of the government of Bahrain and that it is disappointing that the government has provided so little detail about it.

Edward Miliband was also urged to put pressure on the coalition government to end their active support for Bahrain.

“Labour politicians have repeatedly condemned the rights abuses in Bahrain on numerous occasions. In 2012, you publicly called for the cancellation of the Bahrain Grand Prix arguing “given the violence we have seen in Bahrain and given the human rights abuses, I don’t believe the Grand Prix should go ahead.” The complete opposite was voiced by the Prime Minister who stated at the time that “Bahrain is not Syria, there is a process of reform under way and this government backs that reform.” The 2013 UK Foreign Affairs Committee argued that it was difficult to find “any consistency of logic”in the governments approach to the issue.

Katy Clark MP has voiced similar concerns this year by introducing an Early Day Motion (EDM) opposing the staging of the Formula One in Bahrain, condemning rights abuses and highlighting the absence of accountability. It is important to note that 23 Labour MPs signed this EDM alongside 25 Labour MP signatures on EDM 901about the human rights situation in Bahrain and 13 Labour MP signatures on EDM 1081 observing the deteriorating human rights situation in Bahrain.”

Bahrain’s King Hamad Bin Isa Al Khalifa is set to visit the UK this week to take part in the annual Royal Windsor Horse Show. State media has confirmed that his son Nasser Hamad Al Khalifa is also taking part in the show. Prince Nasser is facing serious torture allegations and has been in the spot light this week when a Bahraini refugee has challenged the immunity he holds in the UK to be prosecuted for these allegations. Activists in London have planned protests during the visit

BIRD believes that the UK response to the Bahrain crackdown has been extremely weak. Government officials and royals must use the influence that they hold in order to promote the immedient end to violations, the release of political prisoners and the end to the culture of impunity.

In a joint-statement with the Bahrain Center for Human Rights and Bahrain Watch, BIRD  has reiterated the following: