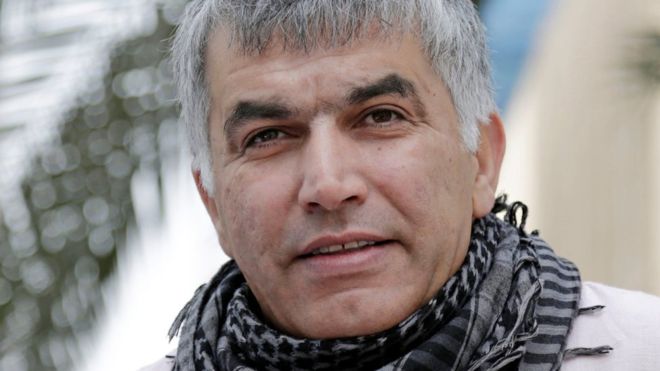 30 May 2017 – Bahrain’s criminal courts today denied Nabeel Rajab bail and for the eighth time postponed his trial, in which he is prosecuted for speaking to journalists, to ​12 June. Rajab, who was hospitalised in April after months spent largely in solitary confinement, has been unable to attend court. His detention continues in the Ministry of Interior’s medical facility.

Rajab, who will have been held in pre-trial detention for a year on 13 June, the anniversary of his arrest, faces another trial on 14 June, this in a separate case regarding his twitter activity.

On 17 May, Rajab’s latest letter was published on the New York Times. Addressing the US administration and American public, he wrote: “For my part, I will not stand idly by. I urge Americans not to do so, either. They must all call for an end to the Trump administration’s unconditional support for my country’s misdeeds at home and abroad.” Trump, who met Bahrain’s King Hamad in Riyadh on 21 May, told the Bahraini King there “won’t be strain” with his administration. Two days later, the Government of Bahrain launched a deadly assault on protesters in Duraz village, killing five and arrested 286.

Today’s refusal to release Rajab comes not long after the UN’s top anti-torture experts called for his “release from detention”. The UN Committee Against Torture, the top expert body on the subject, earlier this month called on Bahrain to end Rajab’s solitary confinement and provide him with medical assistance and redress. The Committee expressed concerns “about the solitary confinement of Mr. Nabeel Rajab which is reported to have exceeded nine months and during which he has been denied adequate medical care”, which it says may amount to torture. The Committee, which found torture to be “widespread” in Bahrain, further called for the “release from detention human rights defenders and journalists who are imprisoned and in detention allegedly in retaliation for their work, including” Nabeel Rajab.

The President of the Bahrain Center for Human Rights has been in police custody for 11 months, most of it under solitary confinement. His health has worsened in his nearly year-long detention. In early April, Rajab underwent surgery for bleeding ulcers. He was discharged from hospital back into police custody contrary to medical advice, and was re-admitted into hospital days later. During his detention, Rajab has undergone two operations, suffered two bouts of heart palpitations that require emergency medical care, and has developed other medical conditions, including a low white blood cell count and depression, Human Rights Watch reports. The lawyers have been denied access to Rajab’s medical reports.

Rajab wrote in his NYT piece: “My detention has entered its 11th month. My health has declined. I’m recovering from a painful surgical procedure, yet the authorities have made every part of my detention as difficult as possible. My lawyers have been obstructed from providing me the best possible defense. But what I have endured is a small fraction of what the people of Yemen have suffered, largely because of the military intervention of Saudi Arabia, Bahrain and their allies.”

The Bahrain Institute for Rights and Democracy (BIRD) spoke to Rajab’s family, who his lawyers have not had full access to Rajab in hospital and that his surgical wound was infected because he was discharged from hospital into a dirty police station cell. Rajab was re-admitted into hospital after his health deteriorated in detention again. The Bahrain Embassy in London claims that Rajab’s access to healthcare is being met adequately.

Sayed Ahmed Alwadaei, Director of Advocacy, BIRD: “Today’s mock trial, in which Nabeel is punished for speaking the truth, shows how desperate Bahrain’s rulers are to silence and punish those who dare to expose the truth. The authorities have treated him in a degrading way for the past year and for what. This would not happen without the green-light from its allies Washington and London. This disastrous policy must be overturned.”

Husain Abdulla, Executive Director, Americans for Democracy & Human Rights in Bahrain (ADHRB): “Nabeel Rajab is another victim of Trump’s human rights-ignorant police. Trump’s silence amid Bahrain’s deadliest crackdown all but ensures Rajab’s continued persecution for his work. The US administration must renew its calls for Rajab’s release. The Obama Administration called for Rajab’s release in 2016.

Last week saw the deadliest day since protests began in 2011, with five killed and 286 arrested last Tuesday in a brutal raid on protesters in Duraz. Activists have also come under threat and alleged intimidation: at least four human rights defenders have been summoned to the National Security Agency for interrogations since last week, with two of them immediately resigning from their public posts after their release.

Further Details on Today’s Trial: Speaking to journalists, facing 3 years
Nabeel Rajab is charged with “spreading false news” and faces three years for telling news outlets that journalists and NGOs are barred from entering Bahrain (Media Interviews Case). Policies of barring critics from entry continue to the present: last week, Human Rights Watch and a freelance journalist were both denied entry into Bahrain, which played host to the FIFA World Congress.

Reflecting the politicised nature of the trial, a previous trial date was postponed twice: having been initially set for the day of the Formula 1 Grand Prix (16 April), it was first postponed to World Press Freedom Day (3 May), and then to 16 May. Rajab did not attend the 16 May hearing due to his ill-health, and the court denied his lawyers’ request for bail. Today’s session was the seventh court hearing in the case.

The trial has had twelve hearings thus far, the last on 17 May 2017. The thirteenth hearing for the long-running trial will be held on 14 June

In sentenced, Rajab faces up to 18 years in prison.