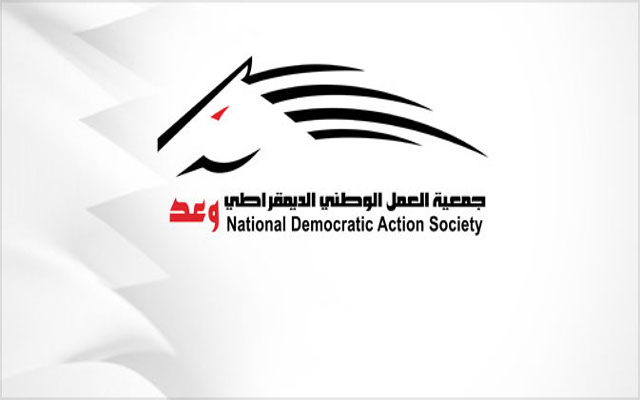 31 May 2017 – Bahraini opposition society Wa’ad has been dissolved today and its property confiscated by court order following proceedings filed by the Bahraini Ministry of Justice and Islamic Affairs.  According to a member of Wa’ad which BIRD spoke to, the ruling will be appealed. Wa’ad (the National Democratic Action Society) is a secular political society founded in 2002.

Sayed Ahmed Alwadaei, Director of Advocacy, Bahrain Institute for Rights and Deocracy: “Shutting down the last opposition party is a declaration of a de facto ban on all opposition. The Government of Bahrain is acting with the aim of totally silencing all peaceful voices, leaving open the alternative of underground opposition and violence.”

He continued: “This was allowed to happen because Bahrain feels zero geopolitical and international pressure from ‘champions of democracy’ in the west.”

The Ministry of Justice and Islamic Affairs (MOJ) launched dissolution proceedings against Wa’ad on 6 March 2017, citing unsubstantiated allegations of “incitement of acts of terrorism and promoting violent and forceful overthrow of the political regime.”

In 2016, the MOJ used a similar pretext to dissolve Al Wefaq, the largest political society in the country.

This is also not the first time that Bahraini authorities have targeted Wa’ad and its members. The society’s headquarters was twice burnt down and vandalized and it has repeatedly faced suspension or threats thereof.

Bahraini authorities have subjected Ebrahim Sharif, former Secretary-General of Wa’ad, on 20 March 2017, officials charged Sharif with “inciting hatred against the regime” and against “factions of society” under articles 165 and 172 of Bahrain’s penal code for messages he wrote on social media. Sharif was previously imprisoned from 2011 to 2015, and then again from 2015 to 2016 on similar charges stemming from his involvement in the pro-democracy movement and speeches he delivered. He could now face up to three more years in prison.

Last week saw the deadliest day since protests began in 2011, with five killed and 286 arrested last Tuesday in a brutal raid on protesters in Duraz. Activists have also come under threat and alleged intimidation: at least four human rights defenders have been summoned to the National Security Agency for interrogations since last week, with two of them immediately resigning from their public posts after their release. This attack days after US President Trump, who met Bahrain’s King Hamad in Riyadh on 21 May, told the Bahraini King there “won’t be strain” with his administration.