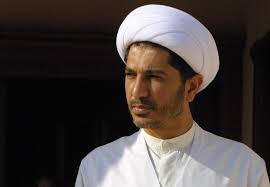 1 November 2017 – The Government of Bahrain has today charged senior political opposition leader Sheikh Ali Salman with communicating with Qatar to work against Bahrain’s interest in 2011. Sheikh Ali Salman, the leader of the now-dissolved Al Wefaq political party, was arrested in December 2014 after serving a four-year sentence on politically motivated charges. According to the Public Prosecution’s statement, Sheikh Ali Salman will remain in detention at the completion of his current sentence, when the new prosecution will begin. Sheikh Ali Salman’s wife Alya Radhi stated on Twitter that he denies the charges.

Sayed Ahmed Alwadaei, Director of Advocacy, Bahrain Institute for Rights and Democracy: “Sheikh Ali Salman is already serving a lengthy prison sentence simply for his peaceful political activities. This new case tries to kill two birds with one stone: on the one hand is Sheikh Ali Salman, who the UN has ruled is arbitrarily imprisoned for his political activity as the leader of the opposition, and on the other is Qatar, whose crisis with Bahrain is being used to further punish dissidents. These charges are a vindictive low for the Bahraini regime.”

Sheikh Ali Salman is the leader of the now-dissolved Al Wefaq political party, which was the largest political party in Bahrain and at its height won 18 of 40 parliamentary seats in the 2010 General Elections. The party was involved in mediation with the Government of Bahrain during and following the 2011 Arab Spring. Al Wefaq boycotted the 2014 General Elections, held in November that year, and Sheikh Ali Salman was arrested a month later. In 2015, the UN Working Group on Arbitrary Detention declared that Sheikh Ali Salman’s detention is arbitrary and called on Bahrain to immediately release and compensate him.

In 2016, the Ministry of Justice ordered Al Wefaq to be dissolved and its assets confiscated. The decision was upheld by Bahrain’s courts of appeal. Amnesty International has described the decision as part of Bahrain’s “Year of Crushing Dissent”. In September 2017, the UN High Commissioner for Human Rights condemned Bahrain’s “shut down” of its democratic space.

The Government of Bahrain’s charges against Sheikh Ali Salman refer back to the events of the 2011 Arab Spring. In February 2011, protesters numbering in the hundreds of thousands took to the streets to demand human rights, democratisation and an end to government corruption. The Government of Bahrain responded with excessive force. Protesters were killed in the streets and others tortured to death in custody. Hundreds of protesters were sentenced to long prison sentences by military courts, among them senior political opposition leaders, human rights defenders and medical professionals.

Qatar’s role in attempting to mediate between the Bahraini government and opposition is well attested. The Bahrain Independent Commission of Inquiry, which investigated the Government of Bahrain’s unlawful killings, systematic torture and unfair trials of protesters during the Arab Spring, notes: “Opposition sources also indicated that the Emir of the State of Qatar, HH Sheikh Hamad bin Khalifa Al-Thani, attempted to mediate between the GoB and opposition parties in the following days, and that this initiative was accepted by the opposition but rejected by the GoB.” The BICI’s report, published in November 2011, was publicly submitted to and accepted by the King of Bahrain.

However, the mediating role of Qatar never arose as an issue before 2017. Bahrain, alongside its allies Saudi Arabia and the United Arab Emirates, have been in a row with neighbour Qatar since June 2017, when they cut all diplomatic contact. There is no indication that the diplomatic row is moving towards a resolution. Most recently, Bahrain has this week announced that Qataris will require visas to enter the country. All four countries are part of the Gulf Cooperation Council, an economic bloc of six oil-producing Arab monarchies which enjoyed visa-free movement.