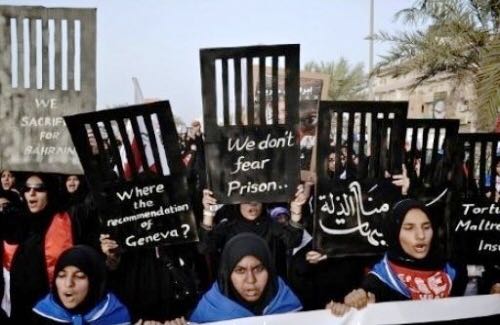 The Bahrain Institute for Rights and Democracy (BIRD) strongly condemns the outcome of these trials, as they are based on “politically motivated charges.” BIRD raises further concerns over the pattern of targeting female activists and the allegations of torture and sexual abuses, which began in 2017 following the empowerment of the National Security Agency with law enforcement powers.

Sisters Fatema, Eman and Amal Ali were convicted for hiding a fugitive. They were first arrested during the early hours of 21 June 2017. In a separate trial, Medina Ali was also convicted for “hiding a convicted criminal.” She was first interrogated on 29 May 2017.

Following her release from detention, Fatema told BIRD in August that officers raided her home, where they began the first stage of her interrogation. Fatema was physically abused and threatened throughout her ordeal. As they transported her to police custody, an officer told her:

“He said ‘Do you know what I will do to you? I will expose you to all Diraz, I’ll strip your clothes and see which of these men will defend you…” I said I don’t know anything. They phoned something they called the Operations Room and told them ‘Prepare the electricity’.”

The Ali sisters were transferred to Isa Town Prison later the same day, where Fatema claims:

“They threatened me with rape. They threatened to arrest all my family, and it would all be my fault. They said your daughter….is just… 9 years old, imagine what a man could do to her. I wanted to leave the interrogations so I signed the confession.”

BIRD also spoke with Medina, who revealed the following:

“The torture started from the first moment in the car by masked, armed, civilian-clothed men. They insulted my sect and dignity and threatened me with rape. They threatened to rape members of my family. I was blindfolded and tortured with violent beatings aimed at the face and hitting my head against the wall violently.”

Megha Ramesh, Research and Advocacy Associate at BIRD, said: “The targeting of female activists appears to be the latest tactic utilised by the Bahraini authorities in facilitating its crackdown against their own civilians. The torture, sexual assault, and unlawful conviction of women has become a worrying new trend.”

BIRD’s research reveals a pattern of fabricated charges, coerced confessions and arbitrary detention of citizens in Bahrain, supporting the findings of Human RIghts Watch and Amnesty International. In May 2017, the UN Committee Against Torture published its most recent report on Bahrain, which found “widespread” use of “torture” and “acceptance by judges of forced confessions”.

These judgments raise the number of women convicted on politically motivated charges to 10, including Hajer Mansoor Hassan, who is the mother-in-law of BIRD’s Director of Advocacy Sayed Ahmed Alwadaei. Hajer’s sentencing was deemed a targeted reprisal by six experts at the UN.

Three further women have been charged and are currently awaiting trial.

Prominent human rights defender Ebtisam al-Saegh was arrested last July on fabricated charges relating to terrorism. Ebtisam has told BIRD that she was physically mistreated, sexually assaulted and verbally abused during her time in detention. Despite being charged, she was released in October 2017, having attracted significant international attention.