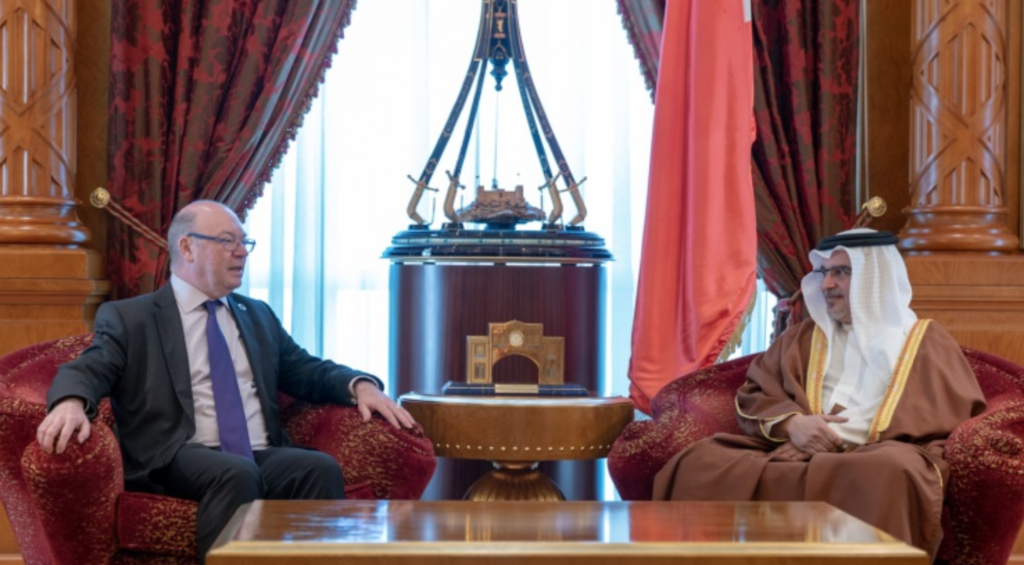 20 February 2019 – Today, Foreign and Commonwealth Office Minister Alistair Burt commenced his visit to Manama to engage with high-level Bahrain officials, including the Crown Prince and Minister of Justice. He also met with the Foreign Affairs Minister to discuss the Bahrain-UK Working Group.

Yesterday, the Chair of the All-Party Parliamentary Group (APPG) on Democracy and Human Rights in the Gulf, Chris Law MP, urged Burt to address human rights issues during his trip and highlighted some of the most urgent concerns.

The Director of the Bahrain Institute for Rights and Democracy (BIRD), Sayed Ahmed Alwadaei, also wrote to Minister Burt ahead of the meeting to request that he intervene in the case of his unlawfully imprisoned family members.

Sayed’s mother-in-law, Hajer Mansoor Hassan, brother-in-law, Sayed Nizar Alwadaei, and cousin, Mahmood Marzooq, are expecting the verdict from Bahrain’s final appeals court on 25 February 2019 on their three-year prison sentence. If their sentence is upheld, they will have exhausted all legal remedies.

Last month, the UN Working Group on Arbitrary Detention found that all three individuals are imprisoned arbitrarily and in reprisal to Alwadaei’s human rights work in the UK.

In addition, political prisoner Ali AlHajee wrote to Minister Burt about his ordeal, including the torture inflicted by Bahraini authorities and the denial of his rights during his imprisonment. Local oversight bodies, which have received UK-funded training, have done nothing to assist AlHajee.

Commenting, Director of BIRD, Sayed Ahmed Alwadaei, stated: “The FCO’s policy towards Bahrain has been crystal clear so far, as they have continued to overlook and cover up the horrific rights abuses that occur in the Gulf state. During his visit, Minister Burt has the opportunity to change this narrative and effect real change by advocating for the release of those imprisoned for exercising their fundamental human rights, including my family who have endured nothing but a travesty of justice. I hope this changes on Monday with their unconditional and immediate release.”

Find below the full letter sent from Chris Law MP:

We, the All-Party Parliamentary Group on Democracy and Human Rights in the Gulf, write to raise a number of concerns regarding the human rights situation in Bahrain. We have learned that you will be meeting with the Bahrain Foreign Affairs Minister in Manama this week, therefore we outline a number of issues that we would like you to address during your visit.

The Bahraini authorities do not appear to be relenting their intolerance to the right to freedom of expression of their citizens. Human rights defenders and members of Bahrain’s civil society more generally are routinely suppressed, most regularly through torture and imprisonment. Six weeks ago, Bahrain’s top court, the Court of Cassation, upheld leading human rights defender Nabeel Rajab’s five-year sentence for tweeting his criticism of the war in Yemen and the torture facing prisoners in Bahrain’s notorious Jau Prison. Last month, the Court of Cassation upheld the life sentence handed to former political opposition leader, Sheikh Ali Salman. Hassan Mushaima, another former political opposition leader, continues to serve his life imprisonment. Female activist Najah Yusuf has been imprisoned for alleged social media activity, which includes Facebook posts calling for peaceful protest against the Bahrain Grand Prix 2017.

The Bahraini authorities have an opportunity to halt this trend on 25 February 2019. On Monday, the family members of UK-based human rights defender, Sayed Ahmed Alwadaei, will receive a decision from the Court of Cassation on their three-year sentence. Mr Alwadaei’s brother-in-law, Sayed Nazar Alwadaei; mother-in-law, Hajer Mansoor Hassan; and cousin Mahmood Marzooq, have all resolutely alleged that they did not commit any crime. The UN Working Group on Arbitrary Decision found basis to their claim by finding that their imprisonment is arbitrary and in reprisal to Mr Alwadaei’s work in the UK. Consequently, we urge your office to make representations to your Bahraini counterpart to ensure that all three are released unconditionally and immediately, as supported by the UN and human rights community.

The number of inmates sentenced to capital punishment has been rising over the past two years. Five individuals, namely Maher AlKhabbaz; Salman Isa Ali Salman, Hussein Ebrahim Marzooq; Sayed Ahmed Fuad Al-Abar; and Hussein Ali Mahdi are at imminent risk of execution as they have exhausted all legal remedies. Furthermore, the order for retrial of death-row inmates Mohammed Ramadan and Husain Ali Moosa certainly represented a positive step, given that their case rests on the coerced confession extracted from Mr Moosa. However, there is still a risk that Mr Ramadan and Mr Moosa will be subjected to an unfair trial as they have been prevented from attend recent hearings of their re-trial.

Three UN Special Rapporteurs have expressed their “most serious concerns that if confirmed the acts alleged would amount to instances of arbitrary detention, enforced disappearance, torture and convictions following trials that would not meet international standards of fair trial and due process.”

The conditions of both Jau Prison and Isa Town prison are of great concern as the rights of political prisoners are neglected frequently. The denial of access to medical care is a recurring issue that affects a number of political prisoners, with four particular cases proving to be exceptionally concerning.

Ali AlHajee was forced to endure a 76 day hunger strike before prison authorities met with him to discuss his demands for medical treatment. Promises were made in early February; not one of these has been fulfilled to date. Meanwhile, human rights defender Naji Fateel also embarked on a hunger strike with Mr AlHajee. At around the 70 day mark, Mr Fateel – motivated by his frustrations – attempted to speed up the process by intensifying his hunger strike. Unfortunately, Mr Fateel’s health took a dramatic turn for the worse and he was forced to end his protest a few days before the prison authorities spoke to Mr AlHajee. Since he was no longer on strike, the prison authorities deemed it appropriate to ignore his request for urgent surgical procedures. In the weeks that have since elapsed, Mr Fateel has not received any assistance.

In the women’s prison, Ms Mansoor has complained about a lump in her breast to both prison authorities and local oversight bodies for almost six months. She now fears that the lump may be cancerous, and is becoming increasingly distressed at the lack of medical attention she is being granted. She has also been suffering from irregular uterine bleeding for the past month, and has not been granted any relief. Similarly, Medina Ali has experienced prolonged, irregular uterine bleeding for a year without receiving any medical assistance.

Denial of medical treatment is unacceptable, and we are dismayed to hear that there are at least four ongoing cases of denial of care.

The aforementioned issues represent a small sample of our total grievances with regards to the protection and promotion of human rights and civil society in Bahrain. We do believe, however, that the discussed problems are urgent and can be resolved with your intervention. As a result, during your meeting with the Bahraini government, we urge you to:

We look forward to hearing about your visit to Bahrain and hope that solutions can be negotiated for the above individuals as a basis for future cooperation.

Chair, APPG on Democracy and Human Rights in the Gulf