Police Break Down Door of Bahraini Embassy to Save Protester 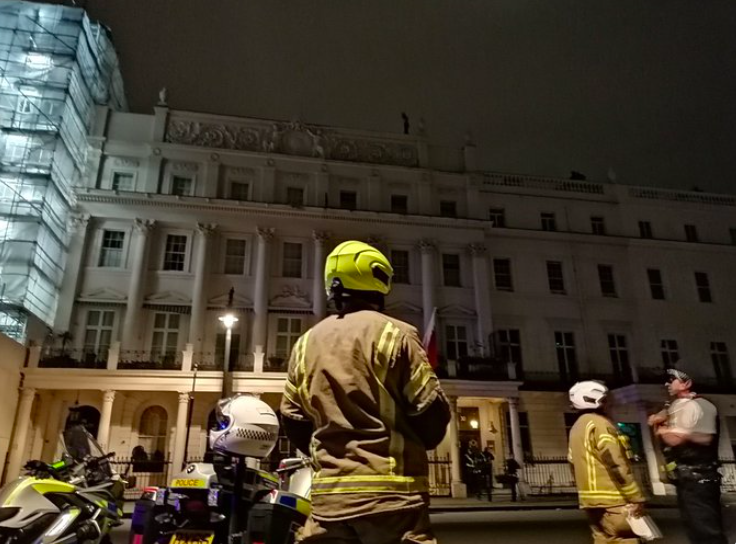 27 July 2019 – Last night, the Metropolitan Police broke down the door of the Bahrain Embassy in London to save a Bahraini dissident from assault from the embassy’s security staff.

Moosa Mohamed had climbed onto the embassy rooftop to protest the imminent execution of two victims of torture Ali AlArab (25) and Ahmed AlMalali (24). Moosa called on newly-appoint Prime Minister Boris Johnson to act now to save their lives.

This is my message to @BorisJohnson #Bahrain pic.twitter.com/hkFw9NVx0A

Moosa was pulled from the ledge of the roof by an embassy staff member and subsequently prolonged screams and cries for help were heard from the street below. The embassy’s staff member has been identified as Husam, who is the personal bodyguard to the Bahrain Ambassador to the UK, Sheikh Fawaz bin Mohammed AlKhalifa.

Here is a clear photo of Husam, this photo was taken on 20 January 2017 when an embassy staffer chucked hot water from the balcony onto protestors belowhttps://t.co/piorzUHoFF@metpoliceuk pic.twitter.com/SZUi2CwHiZ

Metropolitan police ordered staff off the roof. When they failed to comply, officers broke down the door to enter the embassy, as screams continued to be heard from the rooftop.

Moosa stated that he assaulted by two embassy staff members with wooden boards whilst a third filmed the incident. He stated that he sustained injuries and bleeding during the assault and was seen to be barely able to walk upon leaving the embassy in police custody.

Police arrested Moosa upon entering the embassy. Moosa’s lawyer said he was taken to West end central police station and is waiting to find out when he will be interviewed.

Officers did not arrest any embassy officials, citing diplomatic immunity as the cause for their inaction.

The two victims of torture were executed despite protests from Amnesty, Human Rights Watch, Repreive & the UN Special Rapporteur on Extrajudical Killings.

This is not the first time the Bahraini Embassy in London has engaged in violent acts against protesters. In January 2017, during a protest against three executions of torture victims, embassy officials threw hot water from the balcony onto protesters below.

Sayed Ahmed Alwadaei, Director of the Bahrain Institute for Rights & Democracy, said: “It’s appalling that Moosa felt forced to take peaceful, direct action to save the lives of two men, and that embassy officials threatened to throw him from the rooftop. The Metropolitan Police had to break down the door of the embassy, having heard Moosa’s screams for help as he was being beaten.”

He added: “The UK government must halt all training to Bahrain’s brutal police and condemn the barbaric extrajudicial killings that took place early this morning.”

Note for editors: Photos & videos linked to from Twitter can be used freely with attribution. Further video footage is available for sale.