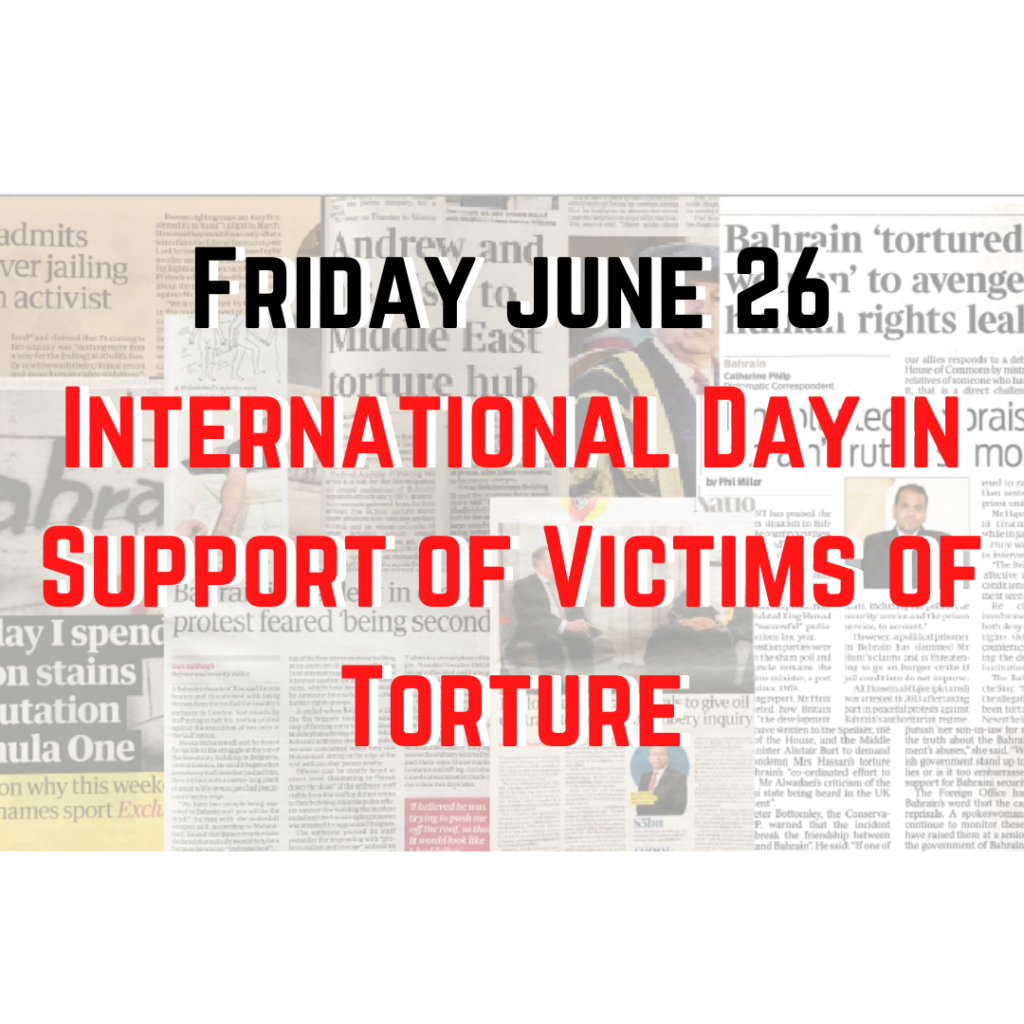 26 June 2020 – On 26th June, the United Nations will observe International Day in Support of Victims of Torture, raising awareness about the continued scourge of torture throughout the world. On this solemn day, Americans for Democracy & Human Rights in Bahrain (ADHRB) and the Bahrain Institute for Rights and Democracy (BIRD) stand in solidarity with torture survivors and call upon the international community to work to put an end to the systematic use of torture in Bahrain and the culture of impunity which prevails in the country.

Despite supposedly committing to reforms, Bahrain’s human rights record has continued to deteriorate in recent years.  In 2017, the UN Committee Against Torture (CAT) strongly criticised the systematic abuse of individuals held in police custody, but three years later torture remains deeply ingrained in the Bahraini justice system and abuses are widely and consistently reported across detention centres.

Bahrain’s judiciary continues to rely heavily on coerced confessions to prosecute defendants and perpetrators of abuses have seldom been held accountable.  As Human Rights Watch has noted, the few prosecutions that have been pursued against Bahraini officers accused of human rights abuses have “almost exclusively involved low-ranking officers and have – without exception – resulted in acquittals or disproportionately light sentences.” Furthermore, local human rights oversight bodies frequently lauded by Bahrain’s Western allies have consistently failed to obtain justice for victims and are widely accused of failing to investigate or actively covering up abuses.

Continued use of torture and death penalty against dissidents

Since Bahrain’s pro-democracy protest movement was crushed in 2011, Bahrain’s political opposition has been ruthlessly suppressed, with torture a central element of the state’s repressive apparatus.  The majority of opposition leaders, including Dr. Abdujalil AlSingace, Abdulwahab Hussain, Hassan Mushaima, Mohammed Habib al-Miqdad and Abdulhadi AlKhawaja, remain incarcerated at Bahrain’s notorious Jau Prison, where they continue to be subject to ill treatment.

In 2017, Bahrain abandoned a 10 year de facto moratorium on the death penalty and six death sentences have since been carried out, with torture frequently playing a role  in securing prosecutions.  Last summer, 24-year old Ali Al Arab and 25-year old Ahmed Al Malali were executed amid widespread accusations of torture and due process violations, with the UN Special Rapporteur for extrajudical executions describing their deaths as “arbitrary killings.”  In 2020, Bahrain reimposed death sentences against Mohamed Ramadhan and Husain Moosa, despite credible evidence that the confessions used to convict them were extracted under duress. Just last week, Bahrain’s Court of Cassation upheld the death sentences against Hussein Abdullah Khalil Rashid and torture victims Zuhair Ibrahim Jassim Abdullah, bringing the number of individuals at risk of imminent execution to above 10.

In Bahrain’s prisons, torture and ill-treatment remain prevelant. Medical negligence continues to be used punitively against political prisoners, a practice condemned internationally, including by four UN Special Rapporteurs in September 2019 and a further eight Special Rapporteurs in November 2019.  Since 2018, human rights defender Ali Al-Hajee has been forced to spend 150 days on hunger strike to secure treatment for injuries sustained during torture by security services in 2013. To this day, he is still awaiting surgery after having 13 teeth removed last year, leaving him struggling to eat solid food.

Tragically, in February 2020, this callous policy also contributed to the premature death from cancer of 24-year old Sayed Kadhem Abbas, who, despite complaining to Jau Prison authorities for months of severe headaches, vomiting and loss of consciousness, was left without specialist treatment for months in 2018.

The International Committee of the Red Cross has highlighted the heightened vulnerability of prison populations amid the outbreak of the COVID-19 pandemic. Under such circumstances, systematic medical neglect is placing the lives of aging political leaders at extreme risk, many of whom suffer from underlying health conditions. In April 2020, 21 NGOs, including Amnesty International and Human Rights Watch called for their immediate release.

Despite widespread use of torture, medical negligence and the return of the death penalty, Bahrain continues to receive unwavering support from its Western allies, particularly from the US and the UK. Much vaunted human rights oversight bodies mandated to independently investigate human rights violations, including the National Institution for Human Rights, the Ministry of Interior Ombudsman and the Special Investigations Unit, are among the Bahraini institutions which have enjoyed significant UK-funding and training. Despite a well-documented lack of impartiality and effectiveness, as well as allegations of their complicity in covering up human rights abuses, the UK government has persistently lauded the success of these institutions and continues to refer torture victims to them.

More recently, alarming allegations of torture have been directly linked to Bahrain’s Royal Academy of Policing (RAP), where UK-based University of Huddersfield teaches an exclusive MSc in Security Science which The Times has characterized as a “torture hub”. Indeed, it has recently emerged that death row inmates, including Zuhair Ebrahim and the executed Ali Al Arab, are among those tortured at the Academy site. However, University of Huddersfield has refused to disclose information about these allegations and rejected calls to suspend its MSc course, citing the UK government’s friendly relations with Bahrain.

The unwavering support of Washington and London has provided Bahrain with a convenient veneer of reform concealing a deeply entrenched culture of torture, corruption and state violence in the Kingdom. On International Day in Support of the Victims of Torture, ADHRB and BIRD call on the international community, and particularly lawmakers in the UK and US, to take a stand by calling on Bahrain to allow an independent investigation into allegations of torture and ill treatment in the country with a view to holding perpetrators accountable, as specified in the Bahraini constitution.