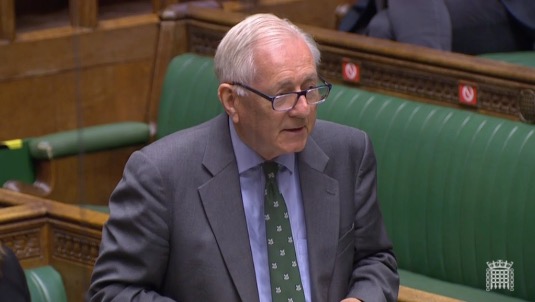 9 July 2020 – Today, Father of the House Sir Peter Bottomley posed an urgent question in the House of Commons regarding Bahraini torture survivors Mohammed Ramadhan and Husain Moosa, who will have their final appeal against their death sentences heard on 13 July 2020.  The ensuing debate, in which 25 other parliamentarians posed questions, reflects growing concern among MPs about the failure of the government’s reform efforts in Bahrain.

In his question, Sir Peter Bottomley asked Minister of State for the Middle East and North Africa James Cleverly whether “he will use the UK’s constructive dialogue with the Government of Bahrain to publicly raise” Mohammed and Husain’s cases, urging the Minister to consider “the work by this house, by Amnesty International, by Reprieve and by Human Rights Watch” with “the proper attention it deserves.”

Sir Peter’s question was followed by an intervention from Labour Shadow FCO Minister Steven Doughty, who noted the brutality of the torture that Mohammed and Husain were subjected to, including interrogators threatening “to rape Mohammed’s wife in front of him after a series of brutal beatings” while hanging Husain “from the ceiling for three days while beating his genitals with batons.”

Mr Doughty added that condemnation of their trial “has been almost universal”, asking the Minister “where are the results” from the government’s engagement with Bahrain, which has seen millions spent on reform while death sentences and executions have continued to rise.

In another question, the Conservative chair of the Foreign Affairs Committee (FAC) Tom Tugendhat raised a 2018 report the FAC produced which discussed Mohammed and Husain’s torture. He encouraged the Minister to “think very hard” about the government’s position on this case, poignantly suggesting that he personally write to the King and urge him to remember the Islamic values of compassion and mercy when considering their death sentences.

Hammersmith’s Labour MP Andy Slaughter noted that there are 26 individuals on death row in Bahrain of whom 10 face imminent execution, including Zuhair Abdullah and Husain Rashid whose death sentences were upheld last week amid widespread allegations of torture and due process violations. He urged the Minister to “look again at the responsibility of individuals in the Bahraini regime, and in particular Prince Nasser bin Hamad, the son of the King, who is alleged to have an involvement in torture going back to the Arab spring”

When challenged on the International Rehabilitation Council for Torture Victims (IRCT) assessment that the UK-funded Special Investigations Unit (SIU) investigation into Mohammed and Husain’s torture was “seriously flawed,” the Minister pointed to the 97 Bahraini police officers tried for human rights abuses. However, according to Human Rights Watch “the few prosecutions that have been pursued against Bahraini officers accused of human rights abuses have almost exclusively involved low-ranking officers and have – without exception – resulted in acquittals or disproportionately light sentences.”

While Mr Cleverly’s response indicated no change in the government’s position on Bahrain, the strength of opposition to Mohammed and Husain’s death sentences expressed in the chamber reflected growing concern among parliamentarians about the government’s unwavering and largely uncritical support for Bahrain. Today’s debate came a day after a similar discussion in the House of Lords, demonstrating a hitherto unprecedented level of scrutiny of UK-Bahrain relations.

A full transcript of the debate is available on the Parliamentary Hansard here.

Sayed Ahmed Alwadaei, Director of Advocacy at the Bahrain Institute for Rights & Democracy (BIRD), commented: “The unprecedented scrutiny this case has received reflects growing bewilderment among MPs at the government’s contradictory Gulf policy. In the same week that the government promised sanctions against human rights abusers, it also resumed arms sales to the Saudi-led coalition in Yemen and defended the government’s reform efforts in Bahrain, despite their failure to prevent a significant rise in death sentences and executions.”

Harriet McCulloch, Deputy Director at Reprieve, commented: “What we heard in the House today from Foreign Office Minister James Cleverly was more empty talk about Britain’s ‘moral responsibility’ to protect human rights in Bahrain. Two Bahraini men are likely to be sentenced to death on Monday, based on false confessions, following a UK-supported whitewash of their torture. It is not enough to have ‘candid conversations’ with Bahrain: Britain must act now to save their lives.”