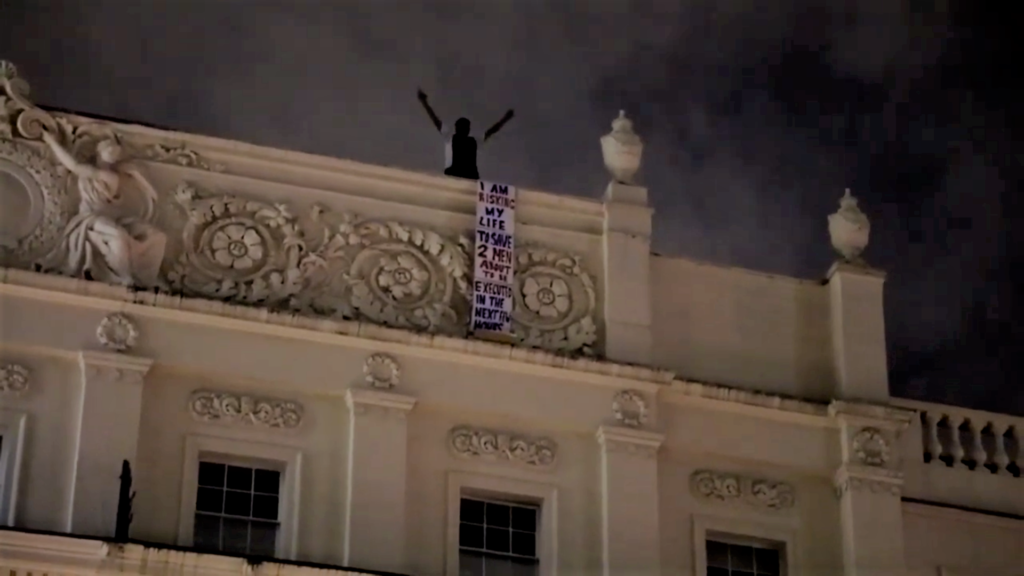 26 February 2021 – A judge at Southwark Crown Court upheld the conviction on 24 February 2021 of Bahraini photojournalist and refugee Moosa Mohammed for trespassing on the roof of Bahrain’s London embassy, after he scaled the building in July 2019 to unfurl a banner calling on Boris Johnson to intervene and prevent the imminent executions of two torture victims in Bahrain, the Bahrain Institute for Rights and Democracy stated.

When upholding Moosa’s 36-month conditional discharge for trespass on a diplomatic mission, Judge Michael Grieve QC accepted that a defence of necessity was available to Moosa as “some form of public protest was the only option open to [Moosa] at the 11th hour” and that his protest had “as good a chance of being reported to the Prime Minister as anything else he could have done that night.” He also noted previously successful UK interventions on behalf of death row inmates in Saudi Arabia and Bahrain in the past, as well as Boris Johnson’s personal relationship with Bahrain’s King Hamad.

The judgement also pointed to “international sensitivity” surrounding the assasination of Jamal Khashoggi in the Saudi Arabian embassy in Istanbul in 2018, arguing “that the UK government would want to do everything possible to avoid any similar occurrence at a mission in the UK.” He added that a defence of “necessity could justify citizens entering to save life in circumstances akin to those of Mr Jamal Khashoggi in Istanbul”, justifying the Metropolitan Police’s decision to storm the embassy building and rescue Moosa.

The ruling coincided with the announcement that U.S President Joe Biden is expected to release an intelligence report naming Saudi Crown Prince Mohammed bin Salman as complicit in Khashoggi’s murder later this week.

However, the judgement ruled ruled that “the idea that Mr Johnson would have made an urgent plea to King Hamad because there was a protester on his Embassy’s roof is, we think, unlikely in the extreme” and therefore his action failed to meet the condition that it be a “reasonable and proportionate response” to the threat of execution faced by Ali Al Arab and Ahmed Al Malali, who were executed hours after Moosa’s rooftop appeal. Moosa’s action thus “amounted to a last desperate, albeit well-intentioned and sincere, attempt to save lives,” but one whose chance of success was “forlorn.”

Moosa’s legal team, led by Kirsty Brimelow QC of Doughty Street Chambers and Ella Jefferson of Bindmans, argued that Moosa understood his action to be the only means available to prevent the executions and that he was acting to prevent a greater crime. Moosa maintains that embassy staff attacked him during his protest, beating him with a stick and attempting to waterboard him with a damp t-shirt. Metropolitan Police made the unprecedented decision to storm the embassy to rescue Moosa. Footage broadcast by Channel 4 appeared to corroborate Moosa’s claim.

Moosa was initially sentenced at Westminster Magistrates Court on 24 September 2020, after Chief Magistrate Emma Arbuthnot ruled that it is “an important point of principle” to protect embassies and diplomatic premises regardless of the human rights record of the country.

Moosa Mohammed commented: “As someone with first-hand experience of torture at the hands of Bahraini police, when I read the harrowing details of two torture victims about to be executed in Bahrain I was forced to take desperate measures. While I was on the roof, I was attacked by staff members from the Embassy who put my life at risk. To this date, none of them have been brought to justice. I still believe that this was the only means available to me to prevent their execution and thank my legal team for their tireless work and outstanding commitment to my case. I will continue to fight on behalf of victims of abuses in Bahrain.”

Sayed Ahmed Alwadaei, Director of the Bahrain Institute for Rights and Democracy (BIRD), commented: “The judge rightly recognised that Moosa’s actions were motivated solely by a desire to save lives and that his action had a reasonable chance of being reported to the Prime Minister. As someone who has been tortured in Bahrain, I commend Moosa’s bravery in attempting to prevent these unlawful executions. There are almost a dozen torture victims on death row in Bahrain facing a similar fate; the UK government should use their full leverage to compel Bahrain to restore their moratorium on the death penalty, so that nobody is forced to take such desperate measures again.”

Kirsty Brimelow QC of Doughty Street Chambers, commented: “Whilst the UK has a long-standing opposition to the death penalty, the actions of Mr. Mohammed were not a protest against capital punishment. He tried to stop Bahrain’s extra-judicial execution of two men by taking the only action he considered was available to him. Whilst his defence of necessity was rejected by the court, the reasonableness of his beliefs remains undisputed. The two men were killed by firing squad mere hours after Mr. Mohammed’s arrest and their execution was condemned by the UN High Commissioner for Human Rights.”