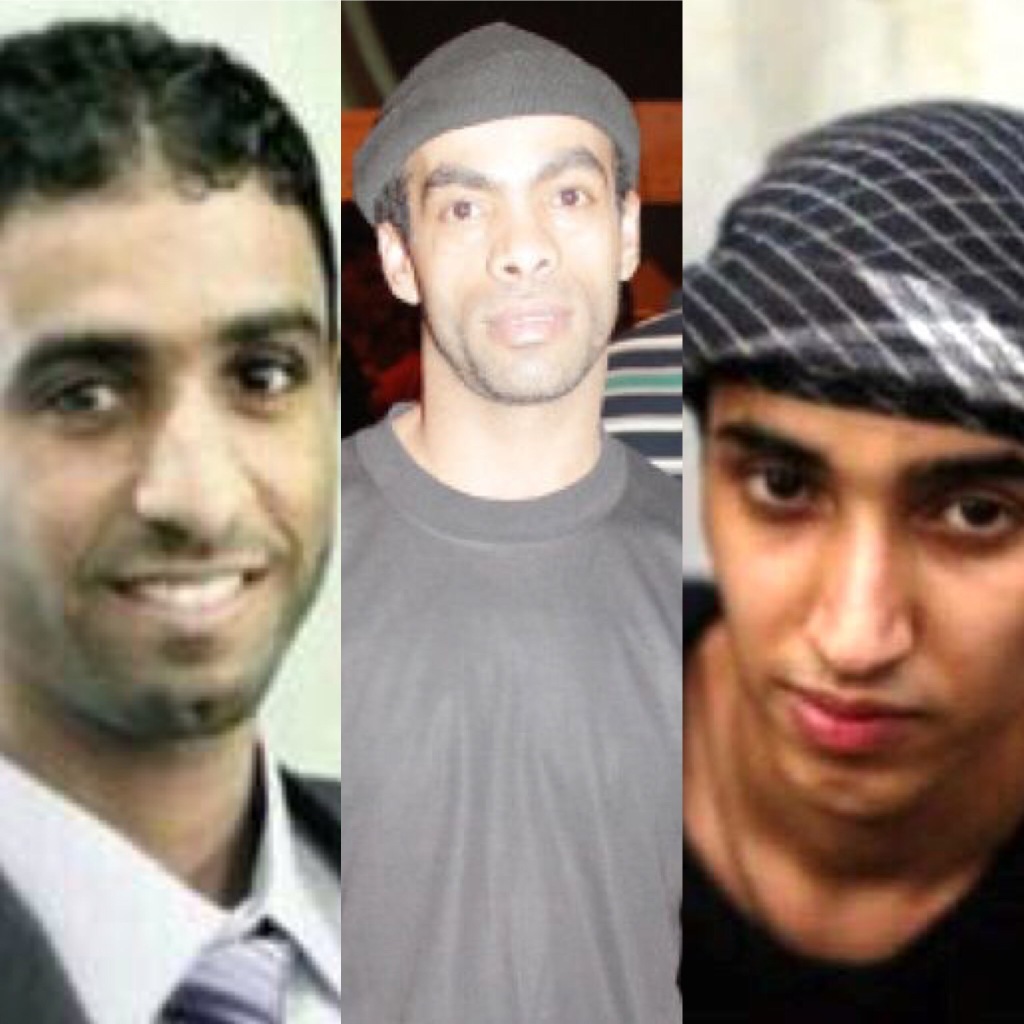 9 January 2017 – The Court of Cassation in Bahrain today upheld the death sentence against three defendants, life imprisonment against seven other defendants, and revocation of citizenship for eight of these ten defendants. They were convicted of killing three policemen in a bombing incident on 3 March 2014. We, the undersigned, condemn this sentence where authorities extracted coerced confessions using torture and did not guarantee fair trial procedures.

The Court of Cassation upheld upheld the death sentences of three individuals – Sami Mushaima, Abbas Al-Samea, and Ali Abdulshaheed Al-Singace; and life sentences for seven others – Ahmed Jaffar, Ali Jameel Al-Samea, Taher Al-Samea, Husain Ahmed, Hasan Sabah, Ahmed Matooq and Redha Mushaima. The government also revoked the citizenship of the defendants. The ten were arrested nearly three years ago, on and after 3 March 2014. Security forces arrested them in house raids on charges of allegedly using improvised explosive devices which led to the death of three police officers, one of them an Emirati citizen. State-sponsored media quickly published photos of the defendants accusing them of murder before the investigation was completed. On 26 February 2015, the High Criminal Court convicted them of all charges and handed down the defendants’ sentences, including stripping them of their citizenship. We, the undersigned, have previously condemned the sentence for unfair trial procedures and the use of evidence extracted under conditions of torture.

In October 2016, the government ordered a retrial for the eight defendants, and last month, an appeals court upheld the death sentence against al-Samea, al-Singace, and Mushaima. After just one month, the Court of Cassation convened to uphold the sentence a final time. The three individuals are now facing imminent execution after exhausting all legal remedies. Following today’s decision, their only recourse is a royal pardon from the king.

We have previously recorded the torture allegations of Abbas Al-Samea and Sami Mushaima, two of the three sentenced to death. Al-Samea, a teacher, was at school at the time of the bombing incident. Sami Mushaima is illiterate. Bahraini authorities subjected them to torture and convicted them of plotting and carrying out the attack. The Court of Cassation claimed that “there was no evidence of coercion in the case documents.” No investigation into the torture allegations was conducted during any of the several trial stages.

Husain Abdulla, Executive Director of Americans for Democracy & Human Rights in Bahrain (ADHRB): “Bahrain shows every indication that it will not change its long-standing course of violating judicial rights and procedures. This recent sentencing of torture victims based on coerced confessions is just the latest example. There must be strong international condemnation to these judicial practices, including a US arms ban until the Bahraini government can prove that it will commit to human rights reforms.”

Abbas al-Samea was arrested on 3 March 2014, three hours after the bombing incident that sparked the arrests. Security forces repeatedly kicked him in the head and body and hit him in the face with a gun. After arriving at the General Directorate of Criminal Investigations (CID), security forces took al-Samea into a series of rooms, subjecting him to different kinds of torture in each one. In one room security forces handcuffed and stripped al-Samea naked before kicking him repeatedly in his genitals. In another room, five officers stood on al-Samea’s chest. Security forces also subjected al-Samea to electric shocks in private and sensitive areas, including his genitals. Security forces beat al-Samea while he was suspended from the ceiling and denied him access to food and water for three days. Al-Samea has also reported that the Public Prosecutor threatened him with additional torture if he did not confess to being culpable in the explosion.

Forces also arrested Sami Mushaima in March 2014 and held them incommunicado for at least 11 days. Security officials subjected Mushaima to beatings, electrocution, and sexual assault. His front teeth were severely damaged. Mushaima’s family believes he was coerced into falsely confessing through the use of torture.

Additionally, during their detention at Jau Prison, a riot took place at the facility on 10 March 2015 in protest of overcrowding and the abusive treatment of inmates. The riot, in which only a minority of inmates participated, was met with excessive force. Officer collectively punished hundreds of prisoners, which included beatings and humiliation. A small number of prisoners, Al-Samea among them, were selected for transfer to “Building 10,” where reports allege authorities subject detainees to severe torture. Al-Samea’s nose was broken and his teeth were knocked out.

There are now five persons facing imminent execution in Bahrain. All of them have suffered a combination of mistreatment, torture, and unfair trials. In addition to today’s victims, in 2015 the Court of Cassation upheld the sentences of Mohammad Ramadan and Husain Moosa, sentenced to death in 2014 for their alleged role in the death of a policeman. They now face imminent execution. Both allege that they were tortured. Ramadan maintains that someone from the government has told him they knew he was innocent, but that he was a traitor deserving of these violations.

Sayed Ahmed Alwadaei, Director of Advocacy at BIRD “Today’s decision increased the torture victims on death row to five. They are facing imminent execution. Bahrain’s allies must condemn this blatant disregard of life.  Given the lack of due process and the inclusion of confessions obtained under torture, these sentences are a mockery of justice. Three stateless men sit on death row. If they are executed they will die as no one.”

By upholding the death sentence of Abbas al-Samea, Sami Mushaima, and Ali al-Singace, the Government of Bahrain has violated their rights to life. Bahraini authorities have additionally violated all ten individuals’ rights to fair trial proceedings in their use of torture to extract coerced confessions. The stripping of citizenship likely renders the victims stateless and must be immediately reversed.

We, the undersigned, condemn the violations of the ten defendants’ rights, in particular the death sentences of Abbas al-Samea, Sami Mushaima, and Ali al-Singace. We call on the Government of Bahrain to: