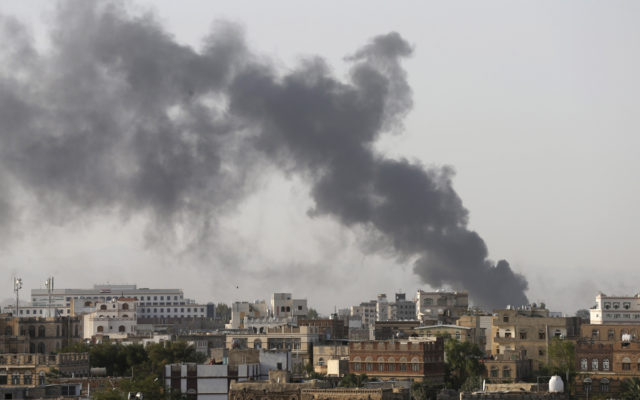 13 October 2017 – Arms sold at Bahrain’s upcoming defence exhibition may be used to commit further atrocities in the Yemen conflict, NGOs have warned companies.

The letter calls on BAE Systems, Lockheed Martin, Defence Equipment Sales Authority (DESA), Bell Helicopter and AeroVironment not to participate in the event, nor advertise or sell products to the Bahrain Defence Force (BDF), until Bahrain withdraws from the Saudi-led military intervention in Yemen.

Bahraini authorities used BAE’s armoured vehicles to crush protests in 2011, according to CAAT. The NGO also reported that BAE’s warplanes have played a central role in Saudi Arabia’s attacks in Yemen.

US President Trump’s planned sale to Bahrain of 19 F16 aircraft made by Lockheed Martin, which will be a Gold Sponsor of BIDEC, follows reports that a BDF’s F-16 jet crashed in Saudi Arabia during an air strike in Yemen. The Trump administration plans to make the multibillion-dollar sale without the human rights conditions previously imposed by the Obama administration, which included the release of human rights campaigner Nabeel Rajab. The conditions were dropped early in the year, and Rajab was sentenced to two years in prison for speaking to journalists in July. He also faces 15 years’ imprisonment in a trial related to his criticism of the war in Yemen and exposure of torture in Bahrain.

The letter also urges companies to refrain from involvement in BIDEC until Bahrain adopts stronger, legally enforceable guarantees that any arms it purchases will not be used to curtail its citizens’ freedoms.

The NGOs root their call to the companies in the UN Guiding Principles on Business and Human Rights, which states that business enterprises have a responsibility to “avoid causing or contributing to adverse human rights impacts through their own activities”.

Sophie Baggott, Policy and Research Associate at BIRD, said: “It is extremely concerning that companies could be content to advertise and sell arms to Bahrain, a member of the Saudi-led coalition whose bombing of Yemen has helped to create the world’s worst man-made humanitarian crisis. Not only could these weapons be used​ ​against​ ​Yemeni​ ​civilians,​ ​but​ ​also​ ​against​ Bahrain’s own ​citizens whose freedoms have been curtailed dramatically over the past 18 months​. Companies should consider their corporate responsibilities and withdraw from BIDEC.”

The Bahrain Defence Force Towards Yemen

The BDF is part of the Saudi-led coalition engaged in a military conflict in Yemen that has killed more than 10,000 civilians and wounded 40,000 others since March 2015.

Last week the UN blacklisted the coalition after reporting that its airstrikes had killed or injured 683 children. The report also revealed 38 verified attacks on Yemeni schools and hospitals by the coalition in 2016. UN sanctions monitors told the Security Council in January 2017 that such attacks “may amount to war crimes”.

According to BIDEC’s website, the BDF is “currently upgrading their capabilities and systems” – an attempt by BIDEC to appeal to suppliers.

The Bahrain Defence Force and Police Brutality Towards Bahraini Citizens

The BDF, a sectarian organisation, promotes hate speech against Shia Muslims and denies them access to military roles. Since 2011, the military organisation has been accused of deliberately recruiting foreign nationals who identify as Sunni.

Police violence in response to Bahraini citizens’ attempts to exercise their freedoms includes the imprisonment of human rights campaigners such as Nabeel Rajab, the use of torture to extract confessions, and the forced shutdown of opposition parties and newspapers.

The National Security Agency has arrested, tortured and sexually abused detainees, including woman human rights defender Ebtisam Al-Sayegh. In May 2017, the Committee Against Torture found there is a “widespread acceptance by judges of coerced confessions” in criminal cases. In January 2017, three torture victims were illegally executed. This year has also seen military courts empowered to try civilians.

The UN High Commissioner for Human Rights in September 2017 condemned Bahrain for increasing its use of torture and shutting down democratic space in the country. In the same month, the UN Assistant Secretary General for Human Rights, Andrew Gilmour, presented a report that Bahrain has engaged in an “ongoing trend of major harassment and intimidation against human rights defenders”, creating “an atmosphere of fear” since June 2016.